Unveiled on the August 23, 2016 episode of SmackDown, it was created to be the counterpart title to the then-WWE Tag Team Championship, which became exclusive to Raw as a result of the 2016 WWE draft. That title was subsequently renamed after the crowning of the inaugural SmackDown Tag Team Champions, Heath Slater and Rhyno. 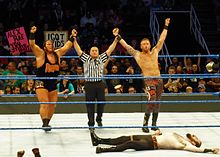 In July 2016, WWE reintroduced the brand extension wherein the promotion again divided its roster between the Raw and SmackDown brands where wrestlers are exclusively assigned to perform; the first brand split ended in August 2011. During the 2016 draft, reigning WWE Tag Team Champions The New Day (Big E, Kofi Kingston, and Xavier Woods) were drafted to Raw, leaving SmackDown without a tag team championship. Over the course of the following month, SmackDown general manager Daniel Bryan stated that he wanted to build up the tag team division before introducing a championship. Immediately following SummerSlam on the August 23, 2016 episode of SmackDown Live, Bryan and SmackDown commissioner Shane McMahon introduced the SmackDown Tag Team Championship (Raw’s title was subsequently renamed).[1] An eight-team tournament was then scheduled to determine the inaugural champions, culminating in a final match at Backlash on September 11, 2016.[2][3][4] The team of Heath Slater and Rhyno defeated The Usos (Jey Uso and Jimmy Uso) in the tournament final to become the inaugural champions.[5] In 2019, WWE’s former developmental territory NXT became the promotion’s third major brand when it was moved to the USA Network in September, thus making the NXT Tag Team Championship the third major tag team title for men in WWE.[6]

When the belts were introduced, they featured the same physical design as the Raw Tag Team Championship, with the differences being that the leather straps were blue as opposed to the former’s original black and the plates were silver as opposed to the former’s original bronze. The Raw Tag Team Championship belt design was updated on December 19, 2016, with silver plates on red straps to bring both sets of titles more in line with each other. While all of WWE’s other championship belts have been updated to feature customizable side plates for the champion’s logos, the Raw and SmackDown tag titles and the 24/7 Championship are the only championship belts in the promotion that lack this feature.

† When Chad Gable suffered a storyline injury after defeating The Usos, American Alpha were removed from the final. The Usos then defeated The Hype Bros at Backlash in a second chance tag team match to replace American Alpha in the final.

As its name implies, the championship was established for the SmackDown brand. However, the title is still eligible to switch brands during the annual WWE Draft.

As of April 5, 2022, overall there have been 26 reigns between 16 teams composed of 30 individual champions, and one vacancy. The team of Heath Slater and Rhyno were the inaugural champions. The New Day Kofi Kingston and Xavier Woods) have the most reigns at seven, both as a team and individually, and their seventh is the shortest reign for the title at 3 days (2 days as recognized by WWE); during their first six reigns, Big E was also recognized as champion under the Freebird Rule. The Usos (Jey Uso and Jimmy Uso) have the longest singular reign at 261+ days for their ongoing fifth reign, and they have the longest combined reign at 641+ days. The oldest champion is Shane McMahon, winning the title at 49 years old, while the youngest is Dominik Mysterio when he won it at 24.

The Usos (Jey Uso and Jimmy Uso) are the current champions in their fifth reign, both as a team and individually. They won the titles by defeating previous champions, Rey Mysterio and Dominik Mysterio, on July 18, 2021 in Fort Worth, Texas during the Money in the Bank Kickoff pre-show.