The WWE Intercontinental Championship is a professional wrestling championship created and promoted by the American promotion WWE, currently defended on the SmackDown brand division. It is one of two secondary championships in WWE, along with the United States Championship on Raw. The current champion is Ricochet, who is in his first reign.

The championship was established by the then-World Wrestling Federation (WWF) on September 1, 1979, as a result of the WWF North American Heavyweight being unified with an apocryphal South American Heavyweight Championship,[2] with Pat Patterson as the inaugural champion. It is the third-oldest championship currently active in WWE, behind the WWE Championship (1963) and United States Championship (1975), but the second-longest tenured championship, as WWE has only owned the U.S. championship since 2001. Although generally contested in the midcard at WWE shows, it has been defended in the main events of pay-per-views including WrestleMania VI, SummerSlam in 1992, the third and eighth In Your House shows, Backlash in 2001, and at Extreme Rules in 2018. It has been called a “stepping stone” to a WWE world championship.[3][4]

The term “intercontinental” in the title originally referred to North and South America.[5] In 1985, the championship belt design changed, the centerplate now centered on the Atlantic Ocean, in a map including western Africa and Europe. On April 7, 1989, the championship was first defended outside of North America, by Rick Rude against The Ultimate Warrior in Turin, Italy.[6] On March 30, 1991, Mr. Perfect made the first Asian defense against The Texas Tornado at a WWF co-promotion with Super World of Sports in Tokyo, Japan.[7] It first came to Africa on April 6, 1997, when champion Rocky Maivia pinned Savio Vega in Durban, South Africa.[8] Shelton Benjamin made the first Australian defense on April 7, 2005, pinning Gene Snitsky in Brisbane.[9] 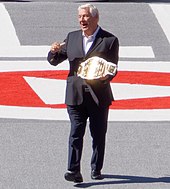 In 2002, after the first brand split had begun and the WWF was renamed WWE, Raw general manager Eric Bischoff began unifying his brand’s singles championships. On July 22, 2002, the Intercontinental Championship was unified with the European Championship in a ladder match, in which then-Intercontinental Champion Rob Van Dam defeated then-European Champion Jeff Hardy. On August 19, 2002, Bischoff made a six-minute gauntlet match for the Hardcore Championship, with the winner facing Van Dam in a second unification match the next week on Raw. Tommy Dreamer successfully retained his title in that match, and lost to Van Dam in a hardcore match the next week.[18][19] As a result of the victories over Hardy and Dreamer, Van Dam is regarded as the last European and Hardcore champion in WWE history; these were his first and fourth reigns with those respective titles.[20][21][22] On September 30, 2002, Bischoff scheduled a match to unify the Intercontinental Championship with the recently created Raw-exclusive World Heavyweight Championship. The unification match took place at No Mercy the following month and saw then-World Heavyweight Champion Triple H defeat then-Intercontinental Champion Kane, making him the Raw brand’s sole male singles champion.[23]

Over Bischoff’s objections, Raw co-general manager Stone Cold Steve Austin reactivated the Intercontinental Championship on the May 5, 2003 episode of Raw and declared any former champion on the Raw roster eligible to enter a battle royal at Judgment Day for the title. Christian won the battle royal to win the championship and restore a secondary singles title for Raw wrestlers to compete for. Eventually, WWE did the same thing for SmackDown and created a separate set of titles for that brand; for its secondary title, SmackDown reactivated the United States Championship that had been unified with the Intercontinental Championship in 2001, placing the WWE name on it while claiming the lineage of the old WCW title of the same name (much as they did with the Cruiserweight Championship when that became WWE exclusive). 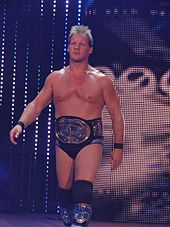 Chris Jericho holds the record for the most reigns, at nine

On October 2, 2011, at Hell in a Cell, Cody Rhodes introduced a modified version of the classic championship belt design with the white strap, with the modern WWE “scratch logo” and other embellishments.[24] Following the end of the first brand split on August 29, 2011, the title could be defended on both Raw and SmackDown. On August 18, 2014, the Intercontinental Championship belt, along with all other pre-existing championship belts in WWE at the time, received a minor update, replacing the long-standing scratch logo with WWE’s current logo that was originally used for the WWE Network. On May 31, 2015, the championship was contested in an Elimination Chamber match for the first time.[25]

On November 22, 2019, episode of SmackDown, Sami Zayn presented a new belt design to champion Shinsuke Nakamura. The redesigned Intercontinental Championship returned to being on a black strap with an entirely new center plate with an irregular shape. The center portion of the center plate features an oval-shape. The top half of the oval says “Intercontinental” and the bottom half says “Champion”; the word “Heavyweight” sits in a banner on the inner side of the oval above the word “Champion”. At the center of the oval is a diamond shape, representing a wrestling ring viewed from above, with the WWE logo over a globe. On the sides of the center, plate is two halves of the globe. The left side features the continents of North and South America as well as Africa and Europe, while the globe on the left shows Asia and Australia; both globes show a portion of Antarctica. The rest of the center plate is filled with ornamentation. Like the majority of WWE’s other championships, the belt features two side plates with a removable center section that can be customized with the champion’s logos; the default side plates consist of the WWE logo over a globe.[27]

Following the brand split on March 25, 2002, all titles in WWE became exclusive to either the Raw brand or SmackDown brand. The brand split was discontinued on August 29, 2011, and revived on July 19, 2016. The following is a list of dates indicating the transitions of the Intercontinental Championship between the Raw and SmackDown brands.

The inaugural champion was Pat Patterson who, as the WWF North American Heavyweight Champion in September 1979 was also declared “South American Heavyweight Champion” after allegedly winning a tournament in Rio de Janeiro. Patterson unified the two championships into the Intercontinental Championship. Since then, there have been 86 different champions. Chris Jericho has the most reigns with nine. Pedro Morales held the championship for a record total of 619 days and The Honky Tonk Man had the longest uninterrupted reign at 454 days, from June 2, 1987, until August 29, 1988. Dean Douglas had the shortest reign at just 13 minutes 52 seconds. Chyna is the only woman in WWE history to win the title. The youngest champion was Jeff Hardy, who won the championship at 23 years old, while the oldest champion was Ric Flair, who won the championship at Unforgiven in 2005 at the age of 56. There have been 10 vacancies throughout the title’s history.[28]

Ricochet is the current champion in his first reign. He defeated Sami Zayn on the March 4, 2022 episode of SmackDown in Miami, Florida.

The championship continued to receive criticism into the 2020s. Kendall panned the recent reigns as forgettable and wrote that the title had “turned into a prop to be lugged around, rather than a title that should bestow prestige.”[30] Cook wrote that it had been “treated as something of an afterthought” for the previous two decades.[31]