This title was the first championship established for NXT, which at the time was a developmental territory for WWE. In September 2019, WWE began promoting NXT as its “third brand” when the NXT television program was moved to the USA Network. NXT was rebranded two years later, which returned it to its original function as WWE’s developmental brand. 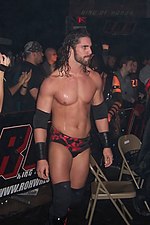 In June 2012, WWE established NXT as their developmental territory, replacing Florida Championship Wrestling (FCW). On July 26, the NXT Championship was introduced as the brand’s top championship, as well as its first title, in turn replacing the FCW Florida Heavyweight Championship that had been retired along with the FCW territory. NXT Commissioner Dusty Rhodes announced an eight-man single-elimination tournament, dubbed the “Gold Rush” tournament, involving four wrestlers from NXT and four wrestlers from WWE’s main roster competing to be crowned the first NXT Champion. On the July 26 taping of NXT (aired August 29), Seth Rollins defeated Jinder Mahal in the tournament final to become the inaugural champion.[1][2] On November 19, 2016, at TakeOver: Toronto, Samoa Joe became the first performer to hold the championship on more than one occasion.[3] 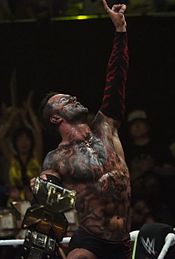 Two-time champion Finn Bálor, who has the longest combined reign at 504 days; shown here with the original NXT Championship belt (2012–2017)

The original NXT Championship belt’s design was simple: a large gold center plate shaped as the letter “X”, with smaller letters “N” and “T” to the left and right of the center. The belt contained six total side plates, three sitting on either side of the center plate; each side plate only featured the WWE logo. When first introduced, the side plates had the WWE scratch logo but in August 2014, all of WWE’s pre-existing championships at the time received a minor update, changing the scratch logo to WWE’s current logo that was originally used for the WWE Network. The plates were on a large black leather strap.

On WrestleMania weekend 2017, all existing NXT title belts at the time were redesigned. The new title belts were unveiled at TakeOver: Orlando that same night and given to the winners of their respective matches. Like the previous design, the plates are gold and on a black leather strap. The letter “X” again dominates the center plate with smaller letters “N” and “T” sitting on the left and right sides, respectively. On this new design, however, the letters are on an octagonal shaped plate. Above the “X” is the WWE logo, while below the “X” is a banner that reads “Champion”. Simple ornamentation with some silver fills in the rest of the plate. Coming in line with the majority of WWE’s other championships, the new design includes side plates with a removable center section that can be customized with the champion’s logo; the default plates feature the WWE logo.[12]

As of April 5, 2022, there have been 27 reigns among 20 different champions and three vacancies. The inaugural champion was Seth Rollins. Samoa Joe has the most reigns at three. Adam Cole‘s reign is the longest singular reign at 396 days (recognized as 403 days by WWE due to tape delay), while Karrion Kross‘ first reign is the shortest at 4 days (recognized as 3 days by WWE) as he had to relinquish the title due to a legitimate injury he suffered in winning it. Finn Bálor has the longest combined reign at 504 days. Bo Dallas holds the record as the youngest champion, winning the title two days before his 23rd birthday (although WWE recognizes it was 18 days after his 23rd birthday due to tape delay), while Samoa Joe is the oldest champion, winning the title at 42.

Bron Breakker is the current champion in his second reign. He defeated Dolph Ziggler on April 4, 2022 at Raw in Dallas, TX.