The WWE 24/7 Championship is a professional wrestling championship created and promoted by the American promotion WWE. It is a tertiary championship open to anyone—regardless of gender or WWE employment status—and carries the special rule that it can be defended “24/7“, as in any time, anywhere, as long as a WWE referee is present. Because of this rule, the championship is available to all of WWE’s brand divisions—Raw, SmackDown, NXT, and NXT UK—with title changes also occurring outside of regular shows, often with videos posted on the promotion’s website and social media accounts, although the title is primarily defended on Raw. The current champion is Dana Brooke, who is in her second reign.

The title was unveiled by Mick Foley on the May 20, 2019, episode of Monday Night Raw, where Titus O’Neil from Raw became the inaugural champion. It is similar to the previous WWE Hardcore Championship, which also had a 24/7 rule. This rule can be temporarily suspended by an authority figure, usually done during a scheduled title defense or non-title matches that involve the champion. 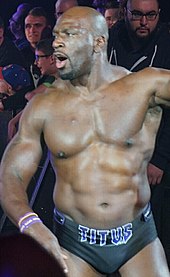 During the 2019 Money in the Bank pay-per-view and WWE Network event on May 19, WWE announced that a new championship would be introduced on the following night’s episode of Raw,[1] where hardcore legend and WWE Hall of Famer Mick Foley unveiled the WWE 24/7 Championship. Like the former WWE Hardcore Championship and its “24/7 rule“, the 24/7 Championship can be defended anytime, anywhere, as long as a WWE referee is present,[2][3][4] hence its name. Due to this, Foley said the title can be defended across all of WWE’s brand divisions: Raw, SmackDown, 205 Live, NXT, and NXT UK. He also said that WWE legends could return and challenge for the title. After the unveiling, Foley laid the title belt in the ring and said that whoever secured the championship first in a scramble would become the inaugural champion. Raw’s Titus O’Neil became the inaugural champion by doing so, defeating Cedric Alexander, Drake Maverick, EC3, Eric Young, Karl Anderson, Luke Gallows, Mojo Rawley, and No Way Jose to claim the championship.[3][4][5] It was later confirmed that the title was not gender-exclusive and could also be won by non-WWE personnel after the respective wins of former WWE female wrestler Kelly Kelly and Fox sportscaster Rob Stone.[6][7]

Although a stipulation of the championship, the 24/7 rule can be temporarily suspended by any authority figure. This usually occurs when the champion is involved in a non-title match. For example, after Elias won the title from R-Truth on the May 28, 2019, episode of SmackDown Live, the brand’s commissioner Shane McMahon suspended the rule until after the scheduled tag team match later that same night, in which both Elias and Truth were involved.[8] The rule can also be suspended during an actual scheduled match for the title to prevent other wrestlers from getting involved. For example, when R-Truth unsuccessfully defended the title against Elias in a lumberjack match on the June 4 episode of SmackDown.[9] Another example is when reigning champion R-Truth was a guest on The Miz‘s “Miz TV” and during a subsequent scheduled match against Drake Maverick, both on the June 24 episode of Raw.[10]

Former WWE wrestler No Way Jose said in a 2021 interview that he had proposed the idea for the 24/7 Championship to a writer about five months before the title’s debut.[11] However, according to professional wrestling journalist Dave Meltzer, the idea for the title was proposed by the USA Network, where Raw and SmackDown had both aired, in an attempt to increase the ratings during Raw‘s third hour.[12] The viewership of both shows had been declining; the April 29 and 30, 2019, episodes of Raw and SmackDown, respectively, both reached a record low for non-holiday broadcasts outside of football season,[13] with viewership dropping off the most during Raw‘s third hour.[14] In October 2019, Meltzer reported that following the 2019 WWE Draft, the title would only appear on Raw due to SmackDown moving to Fox as the title was USA Network’s idea. Although the title was established under the rule that it could be defended on any brand, it has primarily only appeared on Raw since that draft, with only a few exceptions (such as an exchange that occurred during a WWE-related segment of Fox’s 2020 New Year’s Eve special).[15][16]

The championship belt design features three gold plates on a green leather strap. The circular center plate prominently states “24/7” at the center (“24” and “7” written in green). The WWE logo is affixed at the top while the word “CHAMPION” is written along the edge of the bottom half of the center plate. The two side plates, one on either side of the center plate, are rectangular. Unlike most of WWE’s other championship belts, the side plates cannot be customized with the current champion’s logos (due to the relatively short lengths of the title reigns with most not even lasting a day). They are mostly blank but with a simple ornate design on the bottom inner corner and top outer corner of each.[4] As the belt lacks customizable side plates, Drake Maverick placed stickers that said “Maverick 24:7” in the blank space of the side plates,[17] while Samir Singh placed stickers that spelled “Bollywood” around the center plate (as he and his twin brother Sunil, also a former 24/7 Champion, teamed together as The Bollywood Boyz).[18][19]

As of March 29, 2022, there have been 155 officially recognized reigns between 51 different people—there are three reigns that are currently not recognized on the official title history on WWE.com. R-Truth has the most reigns at 53 and the longest combined reign at 425 days (52 and 415 days, respectively, as recognized by WWE). Reggie holds the record for the longest singular reign at 112 days for his first reign. Only 14 other people have had a reign last longer than a day: Angel Garza, Akira Tozawa, Bad Bunny, Carmella, Drake Maverick, Drew Gulak, Elias, Maria Kanellis, Mojo Rawley, Riddick Moss, Rob Gronkowski, Shelton Benjamin, Dana Brooke and both Singh Brothers, Samir and Sunil. Tucker‘s first reign is the shortest reign, which lasted approximately four seconds. WWE Hall of Famer Pat Patterson was the oldest champion, winning the title at 78 years old (which also made him the oldest title holder in WWE history), while Bad Bunny is the youngest, winning the title at 26. Former WWE wrestler Kelly Kelly was the first of eight women to have won the title. WWE Hall of Famer “The Million Dollar Man” Ted DiBiase and R-Truth are the only title holders to hold the championship without winning the title as a result of a pinfall or submission; DiBiase purchased it from fellow Hall of Famer Alundra Blayze, who was about to drop the belt into a trash can (reenacting the infamous incident where she did the same to the then-WWF Women’s Championship after joining World Championship Wrestling in 1995), while R-Truth’s 50th reign began after he convinced Bad Bunny to exchange the title for some Stone Cold Steve Austin memorabilia. The Revival (Scott Dawson and Dash Wilder) are the only tag team to win the title, being recognized as co-champions.[20]

The current champion is Dana Brooke, who in her second reign. She defeated Reggie by pinning him during Raw on February 21, 2022, in Columbia, South Carolina.[20]

The championship’s reveal received a negative reaction from the live crowd, who booed it during the unveiling.[5] Foley said that the bad reception was probably due to the fans wanting to see the Hardcore Championship return as opposed to this new title.[21] Foley was hopeful that it would bring back the fun and excitement that the Hardcore title had with its 24/7 rule, but without the same danger.[22] Fellow WWE Hall of Famer Edge said the concept was fun but the belt “[was] the ugliest championship ever created.”[23] PWInsider’s Mike Johnson liked the concept, but the introduction was “silly,” since fans “believed, just for a second, this belt was going to be something that was unveiled that brought a gritty, edge back.”[24]

The title’s popularity with the fans would subsequently improve; within weeks, the 24/7 Championship would get the highest viewed segments of both Raw and SmackDown on YouTube, garnering millions of views each per video.[25] Multi-time 24/7 Champion R-Truth was voted by WWE fans as their favorite champion in June 2019.[26] During the first months of 2020, the 24/7 Championship’s reception returned to be negative, with criticisms that highlighted the lack of creativity in the segments and in the matches where the title was involved. On the first anniversary of the title in May 2020, Bleacher Report published an article about how WWE could “revive” the 24/7 Championship’s gimmick, saying that “WWE potentially has something special on its hands with the 24/7 Championship gimmick,” but that “at times” the title “merely feels like an afterthought.”[27]