The NXT Women’s Championship is a women’s professional wrestling championship created and promoted by the American promotion WWE, defended on their NXT brand division. Introduced on April 5, 2013, the inaugural champion was Paige. The current champion is Mandy Rose, who is in her first reign.

At the time the title was established, NXT was a developmental territory for WWE. In September 2019, the promotion began promoting NXT as its “third brand” when the NXT television program was moved to the USA Network. However, NXT was rebranded two years later, which returned it to its original function as WWE’s developmental brand. 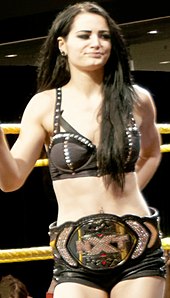 In June 2012, WWE established NXT as their developmental territory, replacing Florida Championship Wrestling (FCW). The following year on April 5, the NXT Women’s Championship was introduced during WrestleMania Axxess. On the May 30 tapings of NXT (aired June 5), WWE’s Chief Brand Officer Stephanie McMahon announced that there would be an eight-woman single-elimination tournament, featuring four women from NXT and four from WWE’s main roster competing to be crowned the first NXT Women’s Champion.[1][2][3] During the June 20 tapings of NXT (aired July 24), Paige defeated Emma in the tournament final to become the inaugural champion.[4]

Paige successfully defended her title at Arrival against Emma, however, then-NXT General Manager John “Bradshaw” Layfield stripped Paige of the title on the April 24, 2014 episode of NXT, as Paige had recently won the WWE Divas Championship, and was in turn promoted to WWE’s main roster. A new tournament began the following week. The finals occurred at TakeOver where Charlotte defeated Natalya to win the vacant NXT Women’s Championship. On the September 16, 2015 episode of NXT, now NXT General Manager William Regal announced that Bayley would defend her title against Sasha Banks in the main event at TakeOver: Respect on October 7 in the first-ever 30-minute Iron Woman match in WWE history.[5] At the event, Bayley defeated Banks to retain the championship, scoring the win with 3 falls to 2.[6][7]

The original NXT Women’s Championship belt featured an oval shaped silver center plate. At the top of the plate was the WWE logo. The center of the plate was the NXT logo encrusted with pink diamonds; red coloring was behind the letter “X”. Above the NXT logo read “Women’s” while below the logo read “Champion”. There were two side plates, which were skinny and matched the curve of the center plate. The inner side plates were encrusted with pink diamonds, while the outer side plates were blank silver plates. The plates were on a black leather strap. When first introduced, the WWE logo was the long-standing scratch logo but in August 2014, all of WWE’s pre-existing championships at the time received a minor update, changing the scratch logo to WWE’s current logo that was originally used for the WWE Network.

On April 1, 2017, at WrestleMania Axxess, NXT General Manager William Regal announced that all of the existing NXT title belts at the time would be redesigned. The new title belts were unveiled at TakeOver: Orlando that same night and given to the winners of their respective matches. The redesigned women’s championship features a nearly identical design to the redesigned NXT Championship, including being on a black leather strap, but with a couple of notable differences. The belt is smaller to fit the women. The letters “NXT” on the center plate are silver instead of gold, while the rest of the plate is gold. One other difference is that a banner reading “Women’s” is underneath the WWE logo. Coming in line with the majority of WWE’s other championship belts, the new design features side plates with a removable center section that can be customized with the champion’s logo; the default plates feature the WWE logo.[13]

On April 2, 2022, at NXT: Stand & Deliver (2022), champion Mandy Rose debuted a new belt design; it is similar to the previous version, but the silver behind the logo has been replaced by multi-coloured paint, inspired by the NXT 2.0 logo and branding. The new title is also on a white leather strap instead of the old black version. 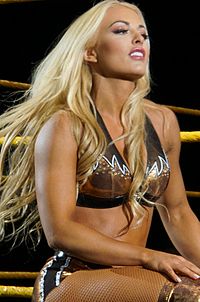 As of April 3, 2022, there have been 14 reigns between 12 champions, and two vacancies. Paige was the inaugural champion. Asuka is the longest reigning champion at 510 days, beginning on April 1, 2016 and ending on August 24, 2017, however, WWE recognizes the reign as 522 days, with it ending on September 6, 2017, the date the episode aired on tape delay.[14] Kairi Sane holds the shortest reign at 71 days; however, WWE recognizes Charlotte Flair’s second reign as the shortest at 63 days due to tape delay (in reality, Flair held the title for either 73 or 74 days; the exact date that she won the title is unknown). Paige is the youngest champion, winning it at the age of 20, while Shayna Baszler is the oldest, winning the championship at 38. Baszler and Flair are tied for the most reigns at two.

Mandy Rose is the current champion in her first reign. She won the title by defeating Raquel González in a Trick or Street Fight match at Halloween Havoc on October 26, 2021 in Orlando, Florida.

Two-time and longest combined-reigning champion Shayna Baszler; she held the title for a combined total of 549 days (548 days as recognized by WWE) 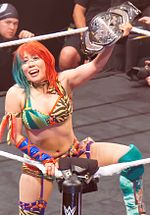 One-time and longest-reigning champion Asuka, whose singular reign lasted 510 days (522 days as recognized by WWE due to tape delay)