Named in honor of WWE’s fans, referred to as the WWE Universe, the championship was established on July 25, 2016, to be the top title of the Raw brand. Its creation came as a result of the reintroduction of the brand split and subsequent draft on July 19, 2016, in which the WWE Championship, the promotion’s original world title, became exclusive to SmackDown. The inaugural Universal Champion was Finn Bálor. Since its inception, matches for the championship have headlined several pay-per-view events, including five consecutive SummerSlams from 2017 to 2021, as well as WrestleMania 34,[1] 37 Night 2,[2] and 38 Night 2,[3] both being two of WWE’s “big five” pay-per-views, the latter of which is WWE’s flagship event. 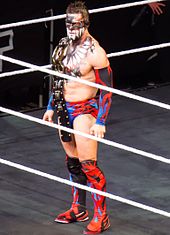 The inaugural champion Finn Bálor, shown here with the original NXT Championship belt and him in his “Demon” persona, which he wrestled under to win the Universal Championship

In mid-2016, WWE reintroduced the brand extension in which the promotion split its main roster between the Raw and SmackDown brands, where wrestlers would exclusively perform (the previous brand extension ended in 2011).[4][5] On July 19, 2016, SmackDown began broadcasting live and on that premiere of SmackDown Live, the 2016 WWE Draft took place and reigning WWE Champion Dean Ambrose was drafted to SmackDown.[6] At Battleground on July 24, Ambrose retained the title in a triple threat match against Raw draftees Seth Rollins and Roman Reigns,[7] leaving Raw without a world championship.[8] On the following episode of Raw, the brand’s Commissioner Stephanie McMahon and General Manager Mick Foley created the WWE Universal Championship to serve as the brand’s top championship. The title was named in honor of the WWE Universe, the name the promotion uses to refer to its fan base.[9][10]

The inaugural champion was crowned at SummerSlam on August 21 in a pinfall and submission-only singles match. Seth Rollins was automatically set for that match as he was Raw’s number one draft pick and was not pinned in the WWE Championship match at Battleground. His opponent was determined by two fatal four-way matches on Raw, with the winners wrestling each other in a singles match.[9] Finn Bálor won the first fatal four-way by defeating Cesaro, Kevin Owens, and Rusev while Roman Reigns won the second by defeating Chris Jericho, Sami Zayn, and Sheamus.[9] Bálor then defeated Reigns and was added to the title match.[11] At SummerSlam, Bálor, wrestling under his “Demon” persona, defeated Rollins to become the inaugural champion. Bálor was the first WWE wrestler to win a world title in his pay-per-view debut as well as winning his first world title in less than a month of his debut on WWE’s main roster.[12][13] During the championship match, Bálor suffered a legitimate shoulder injury and was forced to vacate the title the following day.[14][15]

At Crown Jewel on October 31, 2019, SmackDown wrestler “The Fiend” Bray Wyatt won the Universal title by defeating Seth Rollins in a Falls Count Anywhere match that could not be stopped for any reason, thus transferring the Universal Championship to SmackDown.[16][17] The WWE Championship was subsequently transferred to Raw after reigning champion Brock Lesnar quit SmackDown the following day, taking the title to Raw.[18]

The following is a list of dates indicating the transitions of the WWE Universal Championship between the Raw and SmackDown brands. 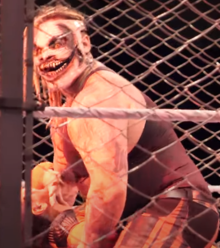 Two-time champion Bray Wyatt, shown here as “The Fiend,” whose custom version of the Universal Championship belt was based on his mask

In addition to the SmackDown version of the belt, Wyatt also introduced a custom version of the championship for his “Fiend” character on the November 29 episode of SmackDown.[22] The custom belt featured The Fiend’s face in the place of the center plate. The character’s phrases “Hurt” and “Heal” were written in red on black leather strips in the place of side plates while the strap of the belt itself was red and black worn leather with red stitching holding it together. The character’s phrase “Let Me In” was also included. Wyatt used both the standard and custom versions of the championship; his cheery Firefly Fun House character held the standard blue belt, while his sinister Fiend character held the custom belt.[23][24]

The Universal Championship design was heavily criticized.[25] Jason Powell of Pro Wrestling Dot Net referred to it as “a title belt that no one likes”.[26] Adam Silverstein of CBS Sports described it as “ugly”[27] while the live SummerSlam audience in Brooklyn, New York gave derisive chants, including “This belt sucks”,[28] an assessment with which New England Sports Network reporters agreed.[29] That site’s Ricky Doyle wrote that the crowd response turned what should have been a “landmark moment for the company” into an “awkward experience”.[30] Mike Johnson of Pro Wrestling Insider felt the title looked like a “xerox” of the WWE Championship and did not blame the audience for reacting negatively.[31] The design was also unpopular with online wrestling fans.[28]

WWE employees responded in the aftermath of the title’s debut. Seth Rollins chastised the SummerSlam crowd’s reaction, writing on Twitter: “More important than a title’s appearance is what it represents for the men fighting over it. You really let me down tonight, Brooklyn.”[30] While acknowledging that he himself might have chosen a different belt design, Mick Foley echoed Rollins’s response in a lengthy Facebook post. He recalled being presented with the WWF Hardcore Championship, a title belt made of broken metal pieces held together by duct tape, which challengers “made … mean something by busting [their] asses”.[32] In a kayfabe promo on the following episode of Raw, the then-villainous Rollins called the championship belt “beautiful”.[26]

Later in 2016, Jim Vorel of Paste ranked the title as the worst of nine then contested in WWE, noting its “obnoxious” design.[25] On the other hand, Nick Schwartz of Fox Sports wrote: “It’s really not as bad as fans made it seem at SummerSlam. It’s fine.”[33] 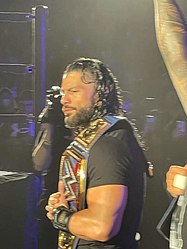 Two-time and current champion Roman Reigns, shown here with the SmackDown version of the belt; his second reign is the longest reign for the championship at 583+ days

As of April 5, 2022, there have been fourteen reigns between eight champions and two vacancies. Finn Bálor was the inaugural champion. Brock Lesnar holds two records with the championship: he has the most reigns at three and he has the longest combined reign at 688 days (686 days as recognized by WWE). Roman Reigns’ ongoing second reign is the longest singular reign at 583+ days, while Bálor has the shortest reign at 22 hours as he was forced to vacate the title due to suffering a legitimate injury in winning it. Kevin Owens is the youngest champion when he won it at 32 years, 114 days old, while Goldberg is the oldest when he won the title for a second time at 53.

Roman Reigns is the current champion in his second reign. He won the title by defeating previous champion “The Fiend” Bray Wyatt and Braun Strowman, who Reigns pinned, in a No Holds Barred triple threat match at Payback on August 30, 2020, in Orlando, Florida. At WrestleMania 38 on April 3, 2022. 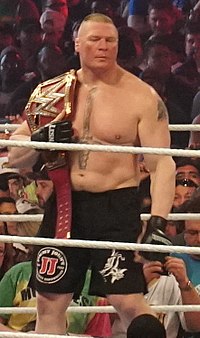 Record three-time champion Brock Lesnar, shown here with the Raw version of the belt. Lesnar also holds the record for the longest combined reign at 688 days (686 days as recognized by WWE).