The WWE Divas Championship was a women's professional wrestling championship in WWE. The championship was created by WWE in 2008, and was introduced as part of the WWE brand extension via a storyline by then SmackDown General Manager Vickie Guerrero as an alternative to Raw's WWE Women's Championship.

Michelle McCool became the inaugural champion on July 20, 2008, when she defeated Natalya at The Great American Bash. After then-WWE Divas Champion Maryse was drafted to Raw as part of the 2009 WWE draft, she took the title with her. McCool won a match against Melina to unify the WWE Divas and Women's titles at the Night of Champions pay-per-view on September 19, 2010, creating the Unified WWE Divas Championship; it eventually dropped the "Unified" moniker. The youngest woman to win the Divas Championship is Paige, at age 21.

With the first WWE brand extension in 2002, a storyline division in which WWE assigned its employees to different television programs and touring companies, the WWE Women's Championship was originally to be defended on both brands. At some point that year, however, it became exclusive to the Raw brand. Thereafter, only Divas on the Raw brand were able to compete for the title, while the Divas on the SmackDown brand were unable to compete for a women's-exclusive championship.[1] However, on a few occasions, the regulation was bypassed with Melina, Ashley Massaro, Torrie Wilson, and Nidia challenging for the title while on the SmackDown brand, but none were successful.[2][3]

As a result, WWE created the WWE Divas Championship and introduced it on the June 6, 2008 episode of SmackDown when then SmackDown General Manager Vickie Guerrero announced the creation of the title.[4] On the June 6 and July 4, editions of SmackDown, Natalya and Michelle McCool won their respective Golden Dreams match (also involving Maryse, Victoria, Kelly Kelly, Cherry, and Layla) to qualify for the Divas Championship match.[5][6] At The Great American Bash, McCool defeated Natalya to become the inaugural champion.[7] When Maryse won the title from McCool in December 2008, she dislocated her kneecap at a live event later that month. Similar to how Trish Stratus kept the Women's Championship when she was sidelined with a herniated disc in 2005,[8] Maryse was able to keep the Divas title upon her return in late January 2009. As part of the 2009 WWE draft, then Divas Champion Maryse was one of the people drafted to the Raw brand, in the process making the championship exclusive to Raw.[9] 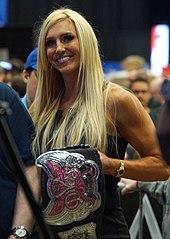 On January 4, 2010, WWE vacated the title after then Divas Champion Melina sustained a torn anterior cruciate ligament. A tournament was started two weeks later on Raw. On February 22 episode of Raw, Maryse defeated Gail Kim to win the vacant championship, making her the first person to hold the title on more than one occasion.

The following is a list of dates indicating the transitions of the Divas Championship between the Raw and SmackDown brands. 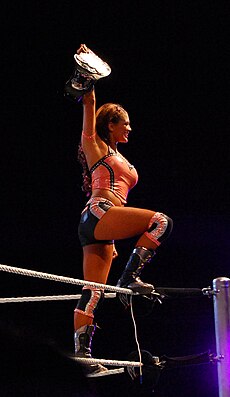 There were 26 total reigns and 1 vacancy. The inaugural champion was Michelle McCool, who defeated Natalya to win the title at The Great American Bash on July 20, 2008.