Thomas Ricca (born June 7, 1968)Template:CN is an American professional wrestler, better known by the ring names Tony Ricca and The Pharaoh. He is also the promoter of the New Jersey-based promotion Arena Kaged Wrestling (AKW).[1]

Tom Ricca grew up in Hammonton, New Jersey. He trained as a wrestler under Larry Sharpe at the Monster Factory and debuted in November 1990 as one half of the tag team called "The Hammonton Hitmen", with tag team partner Leo Petetti. His debut was an event that help benefit the troops that were serving in the Gulf War. After his debut, Ricca was asked to work independently as "The Hammonton Hitman".[2] 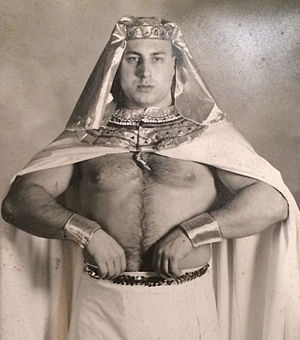 Ricca as The Pharaoh

On July 29, 1991, Ricca wrestled at a television taping for an episode of the World Wrestling Federation (WWF)'s Superstars of Wrestling, and was defeated by Jim Duggan.[3] The episode aired on August 31, 1991.[4] In 1992, at "The Brawl at the Hall", Ricca debuted as The Pharaoh against Glen "Madman" Osbourne in the first main event. The Pharaoh pinned Osbourne after a flying back flip off the top rope.[5]

In 2015, a limited amount of Retro Action Figures of Ricca were made that brought attention to him in the media.[10]

In 2017, Ricca wrote an online article for the magazine Entrepreneur.[11]

In June 1998, Ricca ventured further into the professional wrestling business and opened up Powerslam, a pro wrestling training center on Vine Street in Hammonton. In October 1998, Ricca promoted a wrestling event for the World of Wrestling. 2,000 plus attended the wrestling event which included headliners Jimmy Snuka and King Kong Bundy. Ricca followed with more promotions until he unveiled his new promotion, The AKW, Arena Kaged Wrestling in 2000 at the same location. Ricca brought independent wrestling to another level by adding a caged structure surrounding the fans while watching the event. Ricca had the matches taped for TV and aired on cables network WMCN until Spring of 2002. Ricca promoted many headliners including, Disco Inferno, Vito LoGrasso, Daffney, Captain Lou Albano and many undercard wrestlers. Ricca also wrestled in the AKW as Nicky Sauce using a mask. Nicky Sauce was part of a group called "The Movement", a group in Pro Wrestlings AKW, removes opponents that are voted out of the AKW from AKW's online poll.

In 2019, Ricca brought together groups in Hammonton, New Jersey, to identify its Little Italy district that had been designated for over ten years without any identity. Hammonton is one of the towns in the United States with the highest percentage of residents who claim Italian ancestry. Ricca is working to include signs, banners, a website and an interactive map of the area. The first signage installed for Little Italy is located at one of the district's entrances near Cannoli World, a company owned by Ricca's wife.[12]

In Ricca's free time, he is a Bodybuilding Advisor and is also producing an ebook about fitness and bodybuilding.

In June 2014, Ricca's daughter, Gabriella Ricca, won the USAIGC/IAIGC Gymnastics International World Championships as the 12-year-old division's All-Around Champion and Bar Champion in Orlando, Florida.[13][14] She was the only 12-year-old to receive at least a 9.0 in each event. Her accomplishments received coverage in USA Today , the Courier-Post, and The Press of Atlantic City .