Holly Letkeman[1] (born November 29, 1983) is a Canadian professional wrestler and actress currently signed to Impact Wrestling under the ring name Rosemary, where she is one half of the current Impact Knockouts Tag Team Champions with Havok in their first reign, and a former Impact Wrestling Knockouts Champion. She has worked for promotions such as BSE Pro, BCW, Maximum Pro Wrestling, NCW Femmes Fatales, Smash, Steel City Pro Wrestling, and Shimmer Women Athletes under the ring name Courtney Rush. She is also a former Shimmer Tag Team Champion with Sara Del Rey.

Born in Winnipeg, Manitoba and raised in Stonewall, Manitoba, she was exposed to professional wrestling by her father.[5] During high school, she and a friend briefly trained at a local school, but quit after one session when the school wanted them to have a match.[5] She later attended University of Manitoba, where she majored in film studies.[4] After graduation, she worked on a few film sets,[6] but decided to resume her childhood interest in professional wrestling after hearing of Eddie Guerrero's death[5] and attended Scott D'Amore's school in Windsor, Ontario, in May 2007, where she was taught by Tyson Dux and Johnny Devine, as well as D'Amore. She initially used the ring name PJ Tyler (reflecting her love of Aerosmith), but later changed it to Courtney Rush.[6]

Competing as Casey Maguire, she made her in-ring debut for PTW on January 30, 2008, in a losing effort against Haley Rogers.[7] She was scheduled to take the position of Jennifer Blake as PWX Commissioner but her position was taken by "Danger Boy" Derek Wylde in a controversial way. She soon started a feud with Haley Rogers during a tag team with Jennifer Blake against the same Haley Rogers and Jade Chung. During this contest she broke Haley's nose and she aggravated this injury during a single contest the following week. Those two athletes met different times during the 2008 and GLORY Wrestling dedicated them an article about the match that took place on September 12, 2008.[8] During the first part of 2009 she competed in different matches with Cherry Bomb, Jennifer Blake and Holly Hilton, including a match with Amazing Kong that she was not able to win. On the day of her 26th birthday she was able to win her first title in career defeating Deanna Conda in the final of the WILD Tournament 2009 to win the GCW W.I.L.D. Championship.[9]

She debuted for NCW Femmes Fatales on February 6, 2010 as PJ Tyler. At the beginning she was scheduled to take on Kacey Diamond but plans were changed and she teamed with Mary Lee Rose to take on the team of Anna Minoushka and Anastasia Ivy. She was able to hit with her finishing maneuver, but the team of Anna and Anastasia got the win via pinfall.[10] As the reigning WILD Champion at the time, Tyler was entered into the first ever NCW FF Tournament for the NCW Femmes Fatales Championship. In the first round she faced Portia Perez in a first time ever match but was unable to score the win.[11] In October 2010, Tyler defeated Cat Power and Sassy Stephie in a triple threat match.[12]

In March 2011, she faced Mena Libra,[20] Daizee Haze[21] and Kellie Skater[22] as Courtney Rush as part of the main SHIMMER division but lost to all three. At the next set of tapings in October 2011, she faced Yumi Ohka,[23] Nikki Roxx[24] and Sara Del Rey,[25] where Rush picked up a win against Roxx but lost to the other two wrestlers. After two wins on March 17, 2012, over Rhia O'Reilly and Sassy Stephie, on March 18, the babyface Rush formed a tag team with the villainous Sara Del Rey, first defeating Regeneration X, and then winning a four-way match to become the new Shimmer Tag Team Champions.[26] On June 7, Rush and Del Rey lost the title to the Canadian NINJAs (Nicole Matthews and Portia Perez) at a Femmes Fatales event when Del Rey abandoned her during the match.[27] On April 13, 2013, Rush defeated Athena, Madison Eagles and Saraya Knight in a four-way match to earn her first shot at the Shimmer Championship.[28] Rush received her title match later that same day, but was defeated by the defending champion, Cheerleader Melissa.[29]

Rush would suffer a fractured collarbone in September 2013, forcing her to miss SHIMMER's October 2013 shows,[30] but she returned for Volume 62 in April 2014, where she lost to Mercedes Martinez.[31]

Rush formed a tag team with Xandra Bale on April 11, 2015, referring to themselves as "Ontario's Top Team." They defeated Made In Sin (Allysin Kay and Taylor Made) at Volume 72, but they would fail to defeat The Kimber Bombs (Kimber Lee and Cherry Bomb) for the SHIMMER Tag Team Championship at Volume 73. After the match, she showed signs of a heel turn due to frustration with Bale.[32] The following day at Volume 74, Rush and Bale were defeated by Team Slap Happy (Evie and Heidl Lovelace), and after the match ended, Rush turned heel and attacked Bale. She defeated Bale with the F5 later that day at Volume 75.[33] 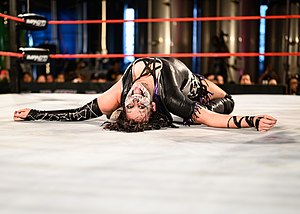 After she signed with TNA, Rush changed her gimmick to Rosemary

In January 2016, Letkeman signed a contract with Total Nonstop Action Wrestling. Her first appearance took place on the January 26 episode of Impact Wrestling, in which she appeared on stage, dressed as a macabre cheerleader, speaking in riddles while Crazzy Steve and Abyss attacked TNA Tag Team Champions The Wolves and stole their title belts, thus forming a heel stable called Decay.[34] It was later revealed her new ring name was Rosemary. After making sporadic appearances throughout the year, mostly as a valet for Steve and Abyss,[35][36] Rosemary made her in–ring debut on the April 26 episode of Impact Wrestling, defeating Gail Kim.[37] Throughout September, Rosemary, as part of Decay, started a feud with Rebecca Hardy,[38] which also led to a match between the two, that actually ended with a disqualification for Rosemary after spitting mist into the eyes of Hardy then putting Hardy through a table.[39][40][41]

In November, Rosemary started a feud with both Gail Kim and Jade and after Kim was injured she vacated the TNA Women's Knockout Championship.[42][43] This led to a match, which aired on tape delay on the December 1 episode of Impact Wrestling, where Rosemary defeated Jade in a six sides of steel cage match to win the vacant Knockouts Championship for the first time in her career.[44] Month later, during the One Night Only: Live! pay–per–view, Rosemary made her first title defense defeating Sienna.[45] In mid–January 2017, the feud between Rosemary and Jade re–emerged,[46] and the two competed in a monster's ball match, where Rosemary defeated Jade to retain her title.[47] Few weeks later, on the March 2 episode of Impact Wrestling, Rosemary would go on to defeat Jade once again, this time in a last knockout standing match, to retain her championship and end their rivalry.[48] During her reign, Rosemary also went on to fend off challengers like Santana Garrett[49][50] and ODB.[51]

In late–May, after she saved Allie from an attack by Laurel Van Ness and Sienna, and refused to join their stable, Rosemary turned face for the first time since joining the promotion.[52] During the next few weeks, the kayfabe between Allie and Rosemary would continue, with the latter explaining that "The Hive" sent her to protect Allie.[53][54][55] On July 2, at Slammiversary, Rosemary was defeated by Sienna, in what was a unification match for both the Impact Wrestling Knockouts and GFW Women's championships, ending her reign at 266 days — the second longest reign in the title's history.[56]

Shortly after her feud with Valkyrie had ended, Rosemary was placed in Allie's storyline with Su Yung, which eventually led to the burial of Rosemary,[68] which was a way to write her off television due to a torn anterior cruciate ligament that she suffered working an independent promotion.[69][70][71][72][73][74]

On January 6, 2019, after an eight months absence off television, Rosemary returned at Homecoming as she saved Kiera Hogan from an attack by her former friend Allie and Su Yung.[75] Shortly after her return, Rosemary (working as a face once again) continued her storyline with Allie, who had turned on Hogan and allied with Su Yung.[76]

On February 28, 2019, Impact Wrestling announced that Rosemary has re-signed a new two-year contract with the company.[77] On March 29 at Against All Odds, Rosemary entered the Undead Realm to retrieve Allie's soul, but was unsuccessful as Allie was "killed" by Yung.[78][79] On the May 17 episode of Impact!, Rosemary's rivalry with Yung reached to it climax when Rosemary defeated Yung in a Demon Collar match, draggin Yung with the collar afterwards.[80] On the June 7 episode of Impact!, the returning Havok freed Yung, when she attacked Rosemary and Valkyrie during their match against each other.[81] At Slammiversary XVII, Rosemary competed for the Knockouts Championship in a four-way Monster's Ball match against Havok, Valkyrie who was then-champion and Yung, as Valkyrie retained her title.[82]

On the February 4, 2020, episode of Impact!, Rosemary challenged Yung, who changed her appearance and name to Susie.[83] The two wrestled into a double count-out and continued to brawl backstage, when Rosemary wrapped a noose around Susie's neck and resurrecting Su Yung.[83] On the March 24 episode of Impact!, when Havok and Yung were betrayed by their manager Father Mitchell when he sent them to the Undead Wasteland, Rosemary helped them to escape, ending her feud with Yung in the process, who would later return to her Susie persona.[84][85]

After spending some time together on the short-lived recurring segment on Impact! called Wrestle House, Rosemary formed a team with her formal rival, Taya Valkyrie. The team competed in the tournament to crown new Knockouts Tag Team Champions, but lost in the second round to the eventual winners, Fire 'N Flava on the December 15, 2020 episode of Impact!. The two did not team together after the tournament loss and the team was officially disbanded when Valkyrie was released from Impact Wrestling on January 19, 2021.

On August 26, 2017, Rosemary took part in Lucha Libre AAA Worldwide's Triplemanía XXV, working in a four-way match for the AAA Reina de Reinas Championship. The match ended with Sexy Star submitting Rosemary for the win with an armbar, reportedly popping her arm out of its place legitimately in the process. The incident gained some attention among other wrestlers, who voiced their opinions on social media on the apparent shoot.[1][86] As a result, AAA subsequently stripped Sexy Star of the win and championship by imposing a legit disqualification.

Courtney Rush has also acted in several independent movies, including Monster Brawl (where she played Witch Bitch[87]), Exit Humanity and Beat Down.[4]

In 2018 Rosemary and Allie began the series Masters Of The Multiverse on YouTube. 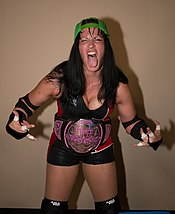 Rosemary (then known as Courtney Rush) posing with the nCw Femme Fatales championship belt post-match in 2014. 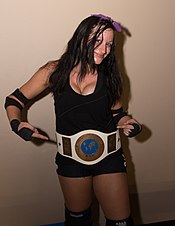 Rush during her reign as Bellatrix World champion