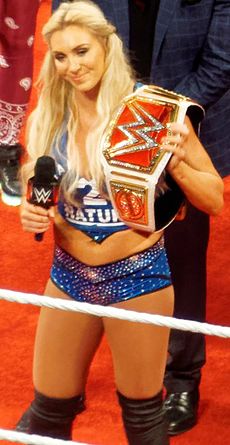 On April 3, 2016, WWE Hall of Famer Lita appeared during the WrestleMania 32 pre-show: after recapping the history of women's professional wrestling in WWE, she declared that WWE's women would no longer be referred to as WWE Divas, but as "WWE Superstars" like their male counterparts.[1] The term "Diva" had been criticized by some commentators, fans, and several past and present female wrestlers, including reigning Divas Champion Charlotte,[2] as diminishing the athletic abilities of female wrestlers and relegating them to "eye candy".[3][4] Lita also unveiled a new title belt and revealed that the Divas Championship would be retired in favor of a new WWE Women's Championship. The inaugural champion was determined by a triple threat match between Charlotte, Becky Lynch, and Sasha Banks later that night, which was originally scheduled for the Divas Championship.[5] Charlotte, the final Divas Champion, became the first WWE Women's Champion by winning that match.[6]

When the title was introduced, it shared its name with the original Women's Championship. However, the new title does not share the same title history as the original, which was unified with the Divas Championship in 2010, with the combined title inheriting the latter's lineage and history. WWE acknowledges the original championship as its predecessor,[1] and notes that the lineage of female champions dates back to The Fabulous Moolah's reign in 1956.[5]

The championship was the first women's title to be defended in a WWE pay-per-view main event, which was at Hell in a Cell in October 2016; this was also the first-ever women's Hell in a Cell match and the first women's match to main event a WWE pay-per-view. At the event, Charlotte (whose ring name was lengthened to Charlotte Flair) defeated Sasha Banks to become a three-time champion.[8] After two years, it was again featured in the main event match of a pay-per-view, which was the first-ever all-women's pay-per-view Evolution in October 2018, where Ronda Rousey retained the title against Nikki Bella.[9] Rousey then defended the title in a winner takes all triple threat match against SmackDown Women's Champion Charlotte Flair and Becky Lynch in the main event of WrestleMania 35 in April 2019, which Lynch won. This was the first women's match to main event a WrestleMania – WWE's flagship event.[10] On May 10, 2020, the championship became the first in history to be directly rewarded as a result of winning the Money in the Bank ladder match (taped April 15, 2020), which was revealed when the briefcase was opened by Becky Lynch the following night on Raw. Lynch announced that she was forfeiting the title due to pregnancy and announced the Money in the Bank match winner, Asuka, as the new champion.[11]

When the championship was unveiled, there was no brand division as that had ended in August 2011. From its inception until the reintroduction of the brand extension in July 2016, reigning champion Charlotte defended the title on both Raw and SmackDown.

The Raw Women's Championship belt is similar in appearance to the WWE Championship belt (introduced in 2014), with a few notable differences. The strap is smaller for the women, and white, as opposed to black. The die-cut WWE logo in the center plate sits on a red background, as opposed to a black one. The small print below the logo reads "Women's Champion". Gold divider bars separate the center plate from the belt's two side plates. In what has become a prominent feature of the majority of WWE's championship belts, the side plates feature a removable center section, which can be customized with the champion's logo; the default side plates feature the WWE logo on a red globe. This was the first women's title in WWE with customizable side plates.[5]

As of January 16, 2022, there have been 22 reigns between 10 champions. Charlotte Flair, then known simply as Charlotte, was the inaugural champion. She also has the most reigns at six. Becky Lynch's sole reign is the longest at 373 days (398 days as recognized by WWE due to tape delay) while Flair's fifth reign is the shortest at 1 day. Asuka is the oldest champion, winning the title at the age of 38, while Banks is the youngest when she won the title at 24 years, 181 days old.

Charlotte Flair is the current champion in her record sixth reign. She defeated previous champion Nikki A.S.H. and Rhea Ripley in a triple threat match at SummerSlam on August 21, 2021 in Paradise, Nevada.