Template:Multiple image Upon the WWE brand extension in 2002, the company's original World Tag Team Championship initially became exclusive to the SmackDown! brand and was later reassigned to the Raw brand, leaving the former without a tag team title. As a result, then-SmackDown! General Manager Stephanie McMahon introduced the WWE Tag Team Championship and commissioned it to be the tag team title for the SmackDown! brand on October 3, 2002. She stated that the inaugural champions would be determined from an eight-team tournament. On October 20, 2002, the team of Kurt Angle and Chris Benoit defeated Rey Mysterio and Edge at No Mercy in the tournament final to become the inaugural WWE Tag Team Champions.[1]

One-time champions Deuce 'n Domino (right and left), shown here with the original design of the championship when it was still known as the WWE Tag Team Championship of SmackDown!

At WrestleMania 34 on April 8, 2018, then-Raw Tag Team Champions Cesaro and Sheamus were scheduled to defend the titles against Braun Strowman and a partner of his choosing. At the event, Strowman revealed that his partner would be a fan from the live audience. He then went out into the crowd and picked 10-year old Nicholas, and the two defeated Cesaro and Sheamus for the titles. This made Nicholas the youngest WWE champion in history. The following night on Raw, the two relinquished the titles.[6] 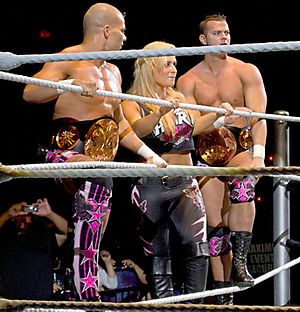 In August 2010, the WWE Tag Team Championship received a redesign. Taking inspiration from Greece, the belts feature a center plate dominated by two Spartan helmets facing outward and the center plate is encircled with a meander pattern. At the top of the center plate is the WWE logo and at the bottom is a banner that reads "Tag Team" on one line and "Champions" below that. On both sides of the center plate are two side plates. The inner side plates feature the WWE logo and are encircled with the meander pattern, while the outer side plates feature a single Spartan helmet facing inward. When this belt design was introduced in 2010, the plates were bronze colored and featured the long-standing WWE scratch logo and the straps were black. In August 2014, the belts, along with all other pre-existing championship belts in WWE at the time, received a minor update, replacing the scratch logo with WWE's current logo that was originally used for the WWE Network.

As of January 16, 2022, there have been 84 reigns between 65 teams composed of 95 individual champions, and one vacancy. The team of Cesaro and Sheamus and The New Day (Kofi Kingston and Xavier Woods) have the most reigns as a team at four, while individually, Kingston and Seth Rollins have the most with six. The New Day's second reign is also the longest reign at 483 days and they are the only team to hold the championship for over one consecutive year—Big E is also credited for this reign as during New Day's first two reigns, Big E, Kingston, and Woods were all recognized as champion under the Freebird Rule (Big E was split from the team in the 2020 WWE Draft). John Cena and The Miz's sole reign is the shortest reign at 9 minutes, due to The Corre invoking their rematch clause immediately after losing the title. As a team, The New Day (across its two different variants of team members) also have the longest combined reign at 627 days, while Kingston individually has the longest combined reign at 912 days (910 days as recognized by WWE). Nicholas is the youngest champion at 10 years old (also making him the youngest champion in WWE history), while Billy Gunn is the oldest champion at age 50.

RK-Bro (Riddle and Randy Orton) are the current champions in their first reign as a team and individually. They defeated previous champions, AJ Styles and Omos on August 21, 2021 at SummerSlam in Paradise, Nevada.