Template:Infobox brand NXT is a brand of the American professional wrestling promotion WWE, introduced on February 23, 2010. For its first two years, NXT was a reality-based television show in which rookies competed to become a star in WWE. NXT re-branded in 2012 and replaced Florida Championship Wrestling (FCW) as WWE's farm system (developmental territory) for their main roster (Raw and SmackDown). However, over time wrestling experts and fans came to view it as its own distinct entity.

Originally holding its shows primarily in the Orlando, Florida area, NXT expanded its reach over time, having embarked on national and international tours, being praised for its high quality of wrestling[1][2] and for captivating storylines.[3][4] NXT's status was elevated when its eponymous TV series moved to the cable network USA in September 2019, and when it became included at that year's Survivor Series event.

WWE now promotes NXT as their third main brand, but some independent journalists still refer to and view NXT as developmental with Raw and SmackDown as the "main roster".

NXT was formed in 2010, following the dissolution of the ECW brand. Initially, the NXT trademark was disputed between WWE and Scotland's Scottish Wrestling Alliance (SWA), whose developmental division was also called NXT.[5] WWE worked with SWA to secure the NXT trademark for their new series with SWA's developmental branch being renamed "SWA: Source."[6] In February 2010, WWE debuted the NXT television program, the program featured rookies from WWE's Tampa, Florida-based developmental territory Florida Championship Wrestling (FCW) competing to become members of WWE's main roster. In June 2012, WWE ceased operating FCW, instead running all of its developmental events and operations at Full Sail University under the WWE NXT banner.[7] The television show would also be revamped the same month to focus exclusively on developmental talent. 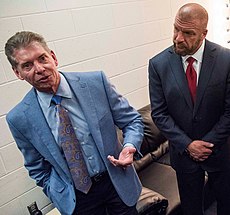 On February 27, 2014, NXT held a live, two-hour event, NXT Arrival, serving as the first live wrestling event for the newly launched WWE Network service.[8][9] After the second live event in May 2014, NXT TakeOver, the "TakeOver" name would be used for future live NXT events airing on WWE Network. In March 2015, NXT promoted its first live event outside of Florida with an event in Columbus, Ohio.[10] On August 22, 2015, NXT held its first TakeOver event outside of Full Sail University, with NXT TakeOver: Brooklyn at New York City's Barclays Center—acting as a support event for SummerSlam. In December of the same year, NXT held its first TakeOver event outside of the United States with NXT TakeOver: London. By 2016, NXT was running approximately 200 shows per year between the United States and overseas.[11]

On August 20, 2019, it was announced that the NXT television series would move to USA Network—the current broadcaster of WWE's flagship Monday Night Raw—and expand into a two-hour, live broadcast on Wednesday nights beginning September 18, 2019. The timing of the premiere coincided with SmackDown's move to FOX in October. As a result of the move, the show would compete with All Elite Wrestling (AEW)'s weekly show, Dynamite, on TNT; marking the beginning of the "Wednesday Night Wars".[12][13][14][15][16]

On October 18, 2019, Drake Maverick – who himself was drafted to SmackDown but remained the General Manager of the 205 Live brand – announced that following the 2019 WWE Draft, he had made a talent exchange agreement with NXT General Manager William Regal, whereby NXT wrestlers (who are within the 205 pound weight limit) could also wrestle on 205 Live.[17][18] NXT founder and executive producer Paul "Triple H" Levesque would then confirm that both 205 Live and NXT UK would essentially be subsidiary brands of NXT, considering wrestlers from those brands all as being under the NXT banner.[19]

On October 31, 2019, during the Crown Jewel pay-per-view, it was announced that at Survivor Series, NXT would be included, competing directly with Raw and SmackDown as part of that event's traditional brand competition theme, confirming NXT's place as WWE's third main brand.[20] In 2020, after winning that year's women's Royal Rumble match, Charlotte Flair chose to challenge Rhea Ripley for the NXT Women's Championship at WrestleMania 36, establishing that NXT Championships are now also options for Rumble winners to choose as they are guaranteed a championship match of their choice at WrestleMania. Although WWE now promotes NXT as their third main brand,[21][22] some independent journalists still refer to and view NXT as developmental with Raw and SmackDown as the "main roster."[23][24][25][26]

The Wednesday Night Wars came to an end in April 2021, when NXT was moved to Tuesday nights.[27] After 12 NXT wrestlers were released from their contracts that August, Dave Scherer and Mike Johnson of Pro Wrestling Insider reported there had been internal talks of major changes to the brand, such as: "a new logo, new lighting, a focus on younger talents and a different format to the TV shows."[28] Dave Meltzer reported that, after having lost the ratings war with AEW, NXT will likely go back to their developmental roots, with "talent that are younger, bigger and that could someday main event at WrestleMania."[29]

In late February and March 2015, several former NXT trainees previously working within WWE developmental system alleged misconduct by head trainer Bill DeMott, with Judas Devlin and Brandon Traven publicizing complaints which they claimed they had submitted to WWE management about DeMott back in March 2013 when they were still employed with WWE.[30][31] Meanwhile, other ex trainees like Briley Pierce, Derrick Bateman and independent wrestler Terra Calaway also made allegations in 2015,[30][31][32][33] while previous allegations made in 2013 by Chad Baxter and Chase Donovan were also noted.[34] They accused DeMott of making trainees perform dangerous drills,[30] physically assaulting and bullying trainees,[30][31] using homophobic and racial slurs amongst other derogatory terms[31][34] and condoning sexual harassment.[32] WWE released statements regarding some of the claims that came to light in 2013 and 2015, saying that investigations were done and no wrongdoing was found.[30][34] On March 6, 2015, DeMott denied the allegations, but resigned from WWE.[32]

The WWE 24/7 Championship can also be defended on NXT as they are shared among the brands.[35][36]
The NXT Cruiserweight Championship is shared between NXT, NXT UK, and 205 Live

The WWE Network was the main broadcaster of NXT's eponymous television program in the United States from 2014 to 2019. Regular episodes ran for one-hour and aired on tape delay, while live NXT TakeOver events were produced periodically. Beginning on May 17, 2012, WWE began filming NXT at Full Sail University in Winter Park, Florida, with the venue being billed on air as "Full Sail Live".[37] Tickets are available free for Full Sail students; general admission for non-students costs $10.[38]

In its original format from 2010 to 2012, the series was a seasonally-broadcast competition series that was filmed in large venues during the SmackDown tapings. The series saw "NXT Rookies" paired with "WWE Pros", with the pairs competing in challenges until one sole winner remained. As with WWE's main programming, the series followed scripted storylines, where wrestlers portrayed heroes, villains, or less distinguishable characters that built tension and culminated in a series of matches or challenges. Results were predetermined by WWE's writers, while storylines were produced on the weekly series.[39][40] Over the course of its five-season run, the winners of each season were Wade Barrett (Season 1), Kaval (Season 2), Kaitlyn (Season 3) and Johnny Curtis (Season 4). After NXT Redemption, the show's seasonal format was dropped.