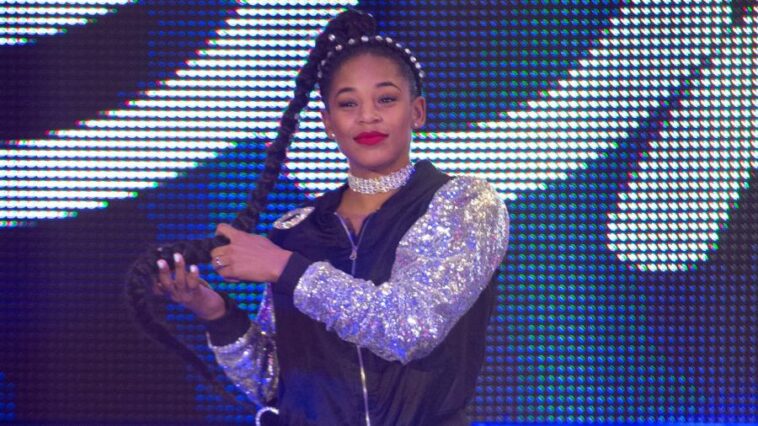 Bianca Belair is such a superlative competitor that she considers herself the EST of WWE. Proclaiming to be the strongest, fastest, toughest and all-around best Superstar going, Belair has been an exceptional athlete her entire life.

Before joining WWE, Belair earned All-SEC and All-American honors in track-and-field at the University of Tennessee. Arriving in NXT, she effectively backed up her EST moniker and gained instant notoriety with big numbers in the WWE Performance Center weight room: Belair led the field in the 2016 and 2017 NXT Combines, thanks to feats like deadlifting 415-pounds.

Unsurprisingly, Belair’s competitive nature has carried over into the ring. Though she relies on rugged power, Belair can be creatively merciless, too, using her long hair braid to whip opponents to shreds. She isn’t afraid to take big risks either, as she showed in the second round of the Mae Young Classic by launching a picture-perfect 450 splash against Kairi Sane and gave a standoff performance in the 2020 Women’s Royal Rumble Match, where the dynamic competitor lasted more than 33 minutes and eliminated eight competitors.

Showing remarkable progress in a short time, Belair emerged at WrestleMania 36 to lend a helping hand to The Street Profits. She then hit the scene on the main roster, first on Raw with the proclamation, “I go here now.” From there, she moved to the blue brand where she has quickly become a standout competitor against the likes on Bayley and Carmella. And after winning the 2021 Royal Rumble Match and defeating Sasha Banks at WrestleMania 37 to claim the SmackDown Women’s Title for the first time, Belair has showed that she was indeed The EST of SmackDown. After being selected by Raw in the first round of the 2021 WWE Draft, however, the ever-determined Superstar will set her sights on becoming The EST of the red brand.